The Road to Montana

Threats of clouds skirted our activity, but all in all we were enjoying great weather – mid-80’s, humidity in the 60’s, a real change from our usual desert fare.  It was perfect for our morning detour to Ellsworth Air Force Base – home of the B1-B Bomber, the defense program that individually brought both Denny and I to California – the first step to our paths meeting.  There’s an interesting museum adjacent to the base, and it was here that we walked around the prototype for the program – brought back lots of memories and instilled a lot of pride.

It wasn’t hard to get a tour of the base, which took about an hour.  Unfortunately, no B1-B’s were air-active that day.

Billings, Montana was our next destination.  Just over three hundred miles away.  We planned to meet up with Christianne & family in Deadwood. This is quite an interesting town, with lots of mining past and saloons to prove it.  These days it seems to be a casino mecca. Of course, there is also a lot of local color, Bill Hicock having been a prominent traveler in the area. 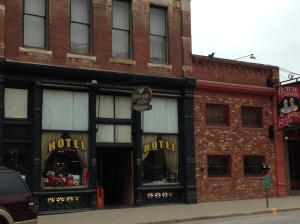 Our curiosity lay in finding the start of the George Mickelson a Trail  – a 100 mile trail that ends up in the Black Hills of South Dakota, and is part of a “rails to trails” conversion.  Surprisingly, the four miles we covered saw a lot of local action.  It’s popular for runners, bicyclists, and walkers like us. 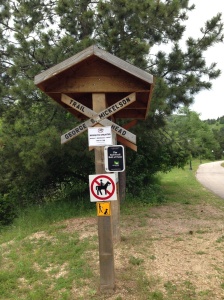 We were still waiting for Christianne’s arrival.  The Visitor’s Center is kind of a hub in the town, right next to an old rail road building with a lot of interesting factoids.  Right behind there we saw the Adams House Museum, and headed over there to get out of the sprinkles that started falling and also check out what hidden historical gems might be stored.

It was pretty amusing, what people will collect.  In addition to a stuffed and mounted two headed calf, and rock from when they carved George Washington’s eye on Mount Rushmore, we found the last hand that Bill Hickok was playing when he was shot in the back. Ace of Diamonds and Clubs, 8 of Spades and Hearts, and the Queen of Hearts.  I think that the Eagle’s may have to reconsider part of the lyrics of Desperado (“..the Queen of Hearts was always your best bet..”)

Reunited shortly, we followed the crew to Devil’s Tower National Monument.  Quite frankly, I had never heard of it before.  And it feels like you are on the road to nowhere while traveling to it.  Route 14 sure didn’t give us any reason to want to circle back to visit Sundance. And I believe that this is actually part of the highly publicized Sundance Trail (as in Butch Cassidy and the Sundance Kid).  There are a lot of good places to lie low, so I can understand their attraction to the area.

Devils Tower was indeed worth visiting.  When up close, there is an interesting green and yellow, which is from all the lichen that grow up its side. And there are always one or two climbers crawling up, like ants on a wall. The park path that circles the lower area is beautiful – nice shade, Deer crossing at will, prayer bundles hanging from trees – beautiful views of the valley.

Time was marching on, though – and we had quite the drive ahead of us to reach Billings that evening. A really short stop in Gillette to refuel both us and the car.  Open road for miles, sunset edging out the highway and the views.  Twelve miles south of reaching the Montana border, we were startled into alertness as a doe sashayed through the darkened gloaming across the road. Several miles later two bucks crossed as well. Eventually we hit the midnight hour and arrived in Billings.

Little Bighorn and Other Things Montana

This site uses Akismet to reduce spam. Learn how your comment data is processed.