…..Disclaimer!!!!! This does not contain technical information (at least not so much) nor is it a how-to – it’s just my experience on the journey…..

What makes fabric shrink, crinkle, or metamorphosize into pleats and bumps when it’s washed or exposed to heat?  Well, there are at least a million different ways that can happen – and they all depend on either heat, friction, agitation, as they relate to a fabric type, or an unimaginable amount of combinations of the above.

Let it suffice to say that it is an endless topic among weavers.  Some want the reaction, some don’t.  I have been working with a group of nine women who have been studying various methods of making your fabric go wonky, on purpose, for the past few months.  I’ve made two attempts – one where I preferred the final piece without the shrinking (so glad it didn’t, and then, did you know that super wash wool really doesn’t shrink?  A Miracle!), and the other where it did exactly what it was supposed to.  Yay!

First, here is the one that didn’t. On the left is the before washing, on the right is after.  Ideally, the brown squares would have shrunk at a greater rate than the stripes, causing “bumps” in the fabric.  But I preferred this end result, and now I have an awesome mid-season scarf that I can wear that looks desert-y.  End of story.

Crinkle fabric is really in these days. The topic is amply covered in magazine articles and books galore.  And while some people are purists about what you call certain weave structures, others (like me) don’t care what you call it as long as it comes out the way you want it to.  Or maybe it doesn’t, but does some other cool thing instead that you can use some other way.  That said, I diligently listened to my fellow weavers, and based on their experiences and reference material, I made my own attempt.

My three-yard warp had three fibers – DK sock weight yarn that I hand-dyed in a class last October, 100% 16/2 linen, and 2/8 Tencil.  18 ends per inch, alternating sock yarn in one dent, and the  linen and Tencil in the alternate dents on a twelve dent reed.  The weft was Guterman Toldi-Lock overlocking thread, which is 100% polyester.  The white threads in the warp are the “pulling” threads, which are 8/2 cotton.  A lot of people use upholstery thread, but this is what I had on hand. In this picture you can see both sides of the cloth, with the pulling threads dormant.

This is the fun part – pulling the fabric together (that’s how the shibori name was applied by some people – but instead of dying the fabric it’s steamed up) so that you end up with a really packed rectangle of cloth.  I was glad I used the 8/2 cotton because it was much easier on the fingers, and it just slide right across without getting stuck.

This is how my sample piece looked once it was all pulled and tied. Excluding the fringe, it was 5 1/2 inches long. (The width was 8 inches.)  I stuck it in a double boiler to steam it for 30 minutes.  The steam shrinks the polyester weft, and that is how the crimp forms. And, I am happy to say, the sample did exactly what it was supposed to! 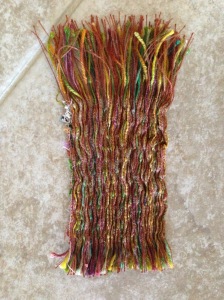 Voila!  The eight inch width shrunk to five inches. The length only shrunk one quarter of an inch. Notice the little “bumps” formed by the space left after the pulling threads were removed.  Nice effect. At least I think so.

Now it’s the main piece’s turn to get processed.  I may sew it into a mobius style scarf (sometimes popularly referred to as “infinity”).  Or it may just tell me what it wants to do.  In any event, project complete!

Here is the finished scarf:

At first I machine-sewed the edges together.  But that made the edges flare out, and I also sewed in a pleat by mistake.  So I took it all out, and then tied the fringes together from alternating sides.  I like it much better when it is folded, versus just hanging.

This site uses Akismet to reduce spam. Learn how your comment data is processed.